Visible ancient archeological remains at the foot of the Gradina Hill, as well as those in the nearby underwater area, caught laymen and experts’ attention rather early. In the 15th century a noble citizen of Šibenik, Juraj Šižgorić (Georgius Sisgoreus) mentioned the existence of this ancient town in his work.

A century later, authors from Šibenik consider this to be the location of Colentum, which was later accepted by Alberto Fortis who included this idea in his Viaggio in Dalmazia (Travels in Dalamatia). Analysis of the texts of Roman authors proves Colentum (Kóllenton) as an ancient name of the island and the settlement, which is probably only the Latin, i.e. the Greek variety of the Liburnian name.

In his Naturalis historia, Pliny provides a precise location in relation to Zadar (30 miles) and the mouth of the Krka River (18 miles), which perfectly corresponds the actual distances. Although Pliny only mentions the island, some time later, Claudius Ptolemy mentions polis, i.e. the town of Kóllenton in his Geographia.

In the Roman period, no later than the 1st century A.D., the settlement spread at the foot of the Gradina Hill, all along the western coast, and towards the Hramina Bay. Ptolemy’s expression “pólis kóllenton”, metioned earlier, leads us to the conclusion that these remains of ancient architecture on the Gradina Peninsula must have been a part of a Roman town that evidently flourished in the early Empire period.

Today we are familiar with the fact that the settlement of Colentum was a harbor, not only because of the remains of the seaport facility, but also because of the importance the maritime zone had for the sea transport. The ancient Colentum’s harbor was located on the northwest side of the Gradina Peninsula, near the present-day church. It was also positioned in a well-protected cove closed by the Gradina Peninsula on one side, and small islands of Mali and Veliki Vinik, and Tegina on the other. Period around the 1st century B.C. is considered to be the period of the greatest transport activity. The town of mosaics

Some contemporary archeologists refer to Colentum as ”the town of mosaics”, since no excavation can go without the discovery of a great number of mosaics. This also supports the ideas of Colentum being a rich center of trade. Roman maritime villa, road, and water tank remain the best-preserved microlocalities until today. A site presumed to hold an ancient necropolis, i.e. a graveyard is still left unexplored. Colentum is considered to have had an acropolis on the top of the Gradina Hill as well. However, it is believed that the majority of construction material had been used for building houses, churches and other structures by the locals. 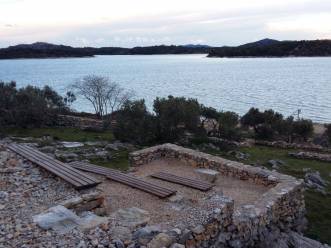 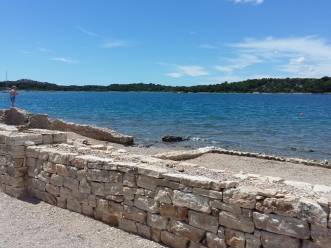 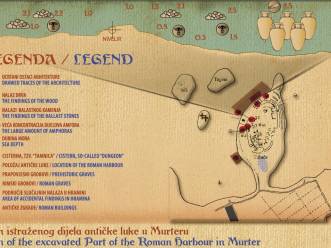 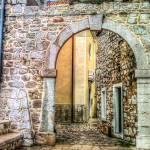 The Gate of the village Pirovac 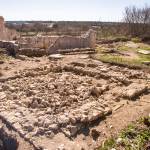 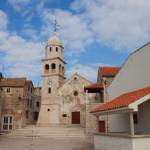 The Church of St. Rocco or St. Helen